As a social worker for more than 30 years, Mary-Ellen Harwood spent a lot of time helping others, especially helping people in need find resources to pay for things they couldn’t afford.

After an on-the-job accident, she had to have numerous surgeries and was unable to work. Her road to recovery was a long one. The series of events with her physical health affected her mental health as well, and she experienced depression as she navigated the physical and financial repercussions, losing her health, her job, and eventually her home.

With the care of her providers and some trial and error, Mary-Ellen was able to find a treatment plan that helped her maintain her mental health, including daily medication, but it was expensive.

“My medicine bills were getting so ridiculous that I was having to choose, ‘do I want medicine or groceries?’,” she said. “I had heard people talk about that before, but that was my first time facing it.”

She fell back on her training as a social worker and looked for resources, which is how she found PAN’s bipolar and schizophrenia co-pay assistance funds. She also qualified for a transportation grant.

“The stability that [the grants] brought me is just incredible. The benefits that I’m reaping. I just can’t say enough,” she said. “And if I hadn’t been a social worker, I’m not sure how I would have ever stumbled upon it.”

The cost of finding the right treatment

Navigating a mental health diagnosis can mean trying different medications to find the right fit. The prescription that worked best for her was expensive, even when she was still working and making a decent income. She had not planned to stop working as early as she did, so she didn’t have as much retirement savings as she had planned for.

“I started feeling like a college student for a while because I was eating ramen noodles,” she said. “I thought what are things coming to? It doesn’t make sense at my age.”

Mary-Ellen explained that mental health parity and a cap for out-of-pocket prescription costs are the first two things on her wish list for Congress.

“[Legislators] could do a lot better if they would just put themselves in our shoes and really believe that seniors and disabled people really do have to choose between medicine and groceries,” she said. “It’s a very real thing. It’s not just hyperbole to make a point.”

She would also like to see mental health services covered by insurance plans like any other healthcare need.

“It’s all about a balance of brain chemicals. There’s really not that much distinction when you look at the chemical side of things.”

Mary-Ellen connected with patient support organizations that work with PAN as alliance partners, who referred her to peer support groups and educational resources. Bipolar disorder is a mood disorder, characterized by a cycle of ups and downs—euphoria followed by a crash into depression.

“I’m so glad that my head is so much clearer now. Really the biggest thing through the peer support is the sense of not feeling alone,” she said, noting that the virtual support has been especially welcome during the pandemic.

With her medication managed and the co-pay support from PAN, Mary-Ellen can focus on the joyful parts of her life, like her four nieces and nephews, the music and culture of Louisiana, and soon, adopting a new kitten.

“I just try to be a kind influence in this world,” she said. “I needed a purpose when I stopped working, even as small as smiling at someone who is having a bad day.”

There aren’t enough thank yous in the world for what PAN has done for me.”

We partner with organizations that support the entire patient journey 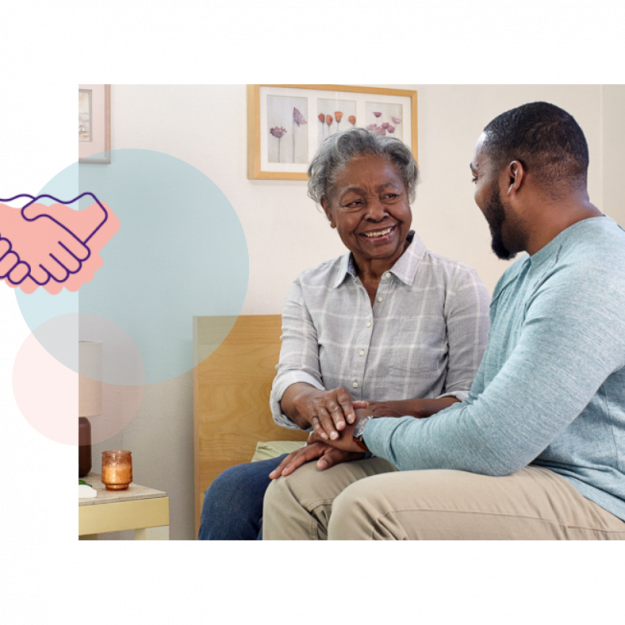