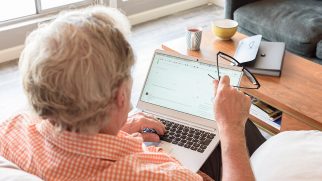 Just a few clicks tell lawmakers you support Medicare reform! Use our simple form to make a difference now.

Lester “Les” Polonsky wants his elected representatives in Congress to know that urgent reform is needed now to ensure people with serious and chronic conditions don’t have to make impossible trade-offs to pay for treatment.

Not only did the weekly classes help Les stay agile, it also brought him closer to a community of individuals who were, like him, living with and managing multiple sclerosis. The group liked to socialize and compare experiences with symptoms, medications, and doctors.

I like to think that I have MS; that MS does not have me.

The price of a ‘miracle’ for Les

While the aerobics class is on hold for now, Les is hopeful to get back to it someday. In the meantime, he’s staying active by babysitting his three young grandkids—all under the age of 8—alongside his wife, Helene.

Les credits his level of activity to a medication that he refers to as a “miracle.”

A rabbi who served for 32 years before retiring, Les was diagnosed with MS in 2006. At the time, he struggled with “dropped foot,” in which his foot would “drop” or drag before he could lift it high enough to make a full step. In people with multiple sclerosis, this is sometimes caused by a poor nerve connection between the brain and legs, and it always increases the risk of falling.

“I was falling, quite frequently, as I was walking,” recalled Les, describing how the condition prompted his doctor to prescribe the aforementioned “miracle” medication that alleviates this symptom.

The problem with Les’ miracle medication is that it doesn’t come cheap.

His co-pay is nearly $600 each month, “which is quite substantial considering my wife and I are both retired and living on social security,” said Les, who has Medicare Part D for his prescription drug coverage.

According to Les, “everything was going well for the first few months, and then I get a bill for $600 and I didn’t understand why…I had reached a certain level [for my coverage] and that was now the new co-pay, which put me in such a bind.”

The trade-offs in healthcare that policymakers should know

Beyond his medication co-pays, Les and his wife’s biggest expense is their monthly mortgage.