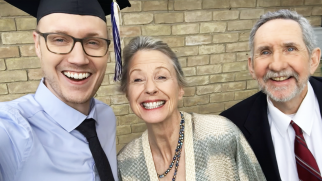 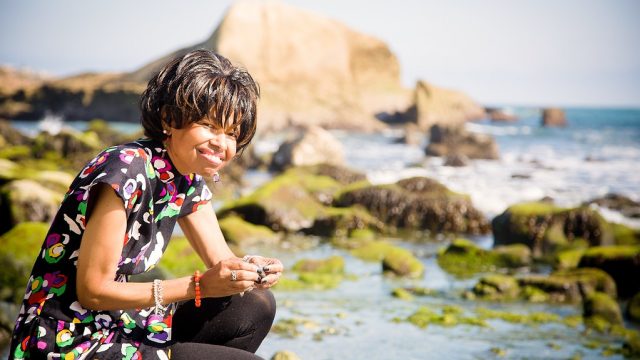 Joan Durnell Powell wants her elected representatives in Congress to focus more on lowering out-of-pocket medication costs in Medicare Part D, so that people with serious and chronic conditions can get busy living.

In 2014, Joan was busy handing out candy to the tiny ghouls and goblins of her neighborhood, but the scariest thing that Halloween was a phone call.

It was her doctor, who told her to take a break from trick-or-treaters and sit down for what came next. As Joan’s heart began to pound, her doctor delivered the diagnosis. Joan had myelodysplastic syndromes or MDS—a rare blood disorder that is considered a type of cancer.

Joan recalled: “She said, ‘Get a piece of paper and write it down.’ And she spelled it. She must have had to spell it like three or four times because I just…I was so nervous.”

At 18 years post-diagnosis, Joan is a powerhouse when it comes to advocating for her condition, treatment, and the advancement of its scientific research. She’s traveled, in her words, “from the beaches of California to the Capitol steps,” as an advocate for patients with MDS.

An important part of Joan’s advocacy is explaining myelodysplastic syndromes as a group of bone marrow disorders. (That’s why “syndromes” is plural, she says). Broadly speaking, Joan explains, MDS is when stem cells in bone marrow stop functioning, preventing the blood cells from properly forming or working.

Adjusting to a new normal

It hasn’t always been easy for Joan to adapt to the realities of her condition. Her treatment involves frequent blood transfusions, daily self-administered injections, and expensive medication.

Joan, who was already retired and on Medicare at the time of her diagnosis, estimated that her annual out-of-pocket costs are upwards of $100,000.

“I must admit, I was very depressed,” she said, recalling her early days, post-diagnosis. “The stress of not knowing how you’re going to pay your co-pay is a nightmare, because most people with a chronic illnesses are already in a stressful situation.” Read how Joan got through these tough times, in her own words.

To alleviate the thousands of dollars of co-pays for her life-saving treatments, Joan first applied for and received a financial assistance grant from the PAN Foundation in 2014.

If it wasn’t for patient assistance organizations like the PAN Foundation, well, I would be dead.

Without looming worry about the cost of her medication, Joan could finally focus on managing her condition and making a difference for others who struggle to afford treatment.

To stay motivated, Joan adopted a motto—“get busy living”—borrowed from The Shawshank Redemption. It is a maxim she embodies to the fullest. Between visits to the doctor and hospital, Joan’s schedule is filled with community service and advocacy—even as activity has shifted to online formats during the pandemic.

Joan serves as the president of the National Council of Negro Women in Orange County; is an active member of the Delta Sigma Theta sorority; and is an officially appointed California delegate for a political party; and volunteers at phone banks to encourage civic engagement at the state and national level. And, of course, Joan is a passionate advocate for patients with MDS.

She believes her role as a patient advocate is especially important as an African American woman, since African Americans are largely underrepresented at advocacy events. Above all, she wants others to know they aren’t suffering alone—that she’s with them.

When it comes to healthcare reforms, Joan vocalized what lower out-of-pocket medication costs in Medicare Part D would mean to her and others with MDS. “The co-pays are really just out of this world, and something has to be done about it,” she said.

“And it is a bipartisan issue in a lot of ways,” Joan said, when discussing solutions to lower what  Medicare beneficiaries pay out-of-pocket for their medications. “But I don’t think their focus is on it as much as it should be. You know, I’m hoping that it will change very soon, because I wouldn’t want anybody to be in this situation.”

More than anything, Joan doesn’t dwell on her diagnosis. She makes the most of her time by speaking up for patients like herself, learning about the latest research and treatment options for MDS, and surrounding herself with positive people.

Or, in Joan’s words: “I took those lemons and made lemonade.”