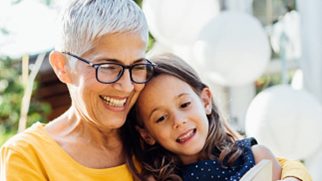 Your support for the PAN Foundation means older adults can access the medications they need for more healthy days!

For decades, 83-year-old Maggi lived an excitingly nomadic and creative life. Born in Hong Kong to missionaries and having spent her childhood in China, India, Burma, and England, Maggi quickly became a citizen of the world. She eventually settled into a career working as a human relations specialist and manager for a Fortune 500 company in the United States, and also married and became a mother to four children.

Now in retirement, Maggi spends her days as a professional artist working in oils, acrylics and collage, and supporting her local art gallery. During this time in October 2012, she was surprised after years of “amazingly good health,” when she was diagnosed with Stage 4 breast cancer; lesions were also found in her hip and lungs.

“We live day to day and I knew we could not afford expensive medications,” she says. “I was feeling resigned to all this, though worried sick about the cost. I was frightened about things I had heard about cancer.”

Getting to know her oncologist helped eased some of the anxiety, but when the treatment plan involved an expensive therapy for metastatic breast cancer, which Maggi’s insurance would not fully cover, the cancer center where she received her care connected her to the PAN Foundation.

“I was able to get a grant from PAN to cover the first year I was on my medication,” she says. “This relieved all the pressure I felt, sometimes desperation. Once PAN stepped in, it was like being reborn, such relief.”

The application process was painless, and today, Maggi credits PAN with saving her life. “I could not have afforded these expensive pills without making me and my husband homeless,” she says.

Today, Maggi remains on treatment, and maintains her art studio. She shares her sense of hope and the importance of moving forward with newly diagnosed cancer patients she meets.

“Never give up,” she says. Diagnostic tests and care are certainly daunting, but “having an easy mind about the money side of things is a huge help in keeping well and upbeat.”

Giving back, Maggi adds, is important, too. “If you get help from PAN, try and give back in some way, even if it is something simple like having a cake sale if you are a good cook and sending PAN the money.”

For the last few years, Maggi has been creating a beautiful calendar. We are grateful that Maggi donates 5 percent of calendar sales to the PAN Foundation.