Why are seniors struggling to afford their medications? - PAN Foundation 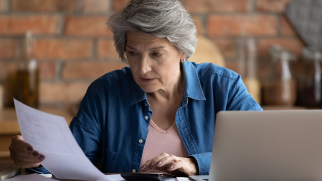 The annual health insurance deductible reset can lead to some tough choices. Support PAN grants that help people afford the care they need.

Daily, low-income seniors across the U.S. are splitting their pills in half.

They’re deciding whether they will buy groceries or pay for a prescription. They’re forgoing the risk-reducing medications they’ve been prescribed, because they can only afford — barely — the one they need to survive.

What can spark someone to take half measures like this, regarding their health?

Medicare Part D, the government health plan’s prescription drug benefit, has no limit on out-of-pocket costs, unlike many commercial plans. Implemented in 2006, the benefit was supposed to help seniors, and in many cases, it has. But the lack of a cap is crushing for chronically ill, low-income patients who live with multiple diseases or conditions and require several prescriptions. Small co-pays snowball if you’re paying them five times a month, after all.

The “doughnut hole,” otherwise known as Medicare Part D’s coverage gap, has drastically decreased, thanks to the Affordable Care Act and last year’s budget bill. A change in how Medicare calculates the out-of-pocket threshold before catastrophic coverage begins, however, will increase that amount by $1,250 in 2020. And while $100 per month may not sound like much for some of us, among those living Social Security check to Social Security check, it might be a month’s food budget.

For patients who need specialty drugs — such as those suffering from cancer, multiple sclerosis, rheumatoid arthritis, etc. — their extra out-of-pocket expenses could be significantly more, anywhere from $2,600 to $16,500. That goes well beyond groceries.

Bottom line: If you’re 65 or older and have a chronic illness, rising out-of- pocket costs jeopardize your ability to pay for preventative care and necessities.

It falls to our lawmakers to pursue legislation that caps these costs and fights for the protection of the most vulnerable Americans in our flawed health care system. Recent polling data tells us that 76% of voters support legislation that would cap or limit what seniors pay out of pocket for prescription drugs in Part D. Now is the time for action to protect our seniors.

It will take more than cheaper prescriptions to move our system to one focused on preventing disease — prevention is truly predicated on stopping illnesses from beginning in the first place. But even modest changes to Medicare can have wide-felt impacts through the entire health care system, including private insurance plans.

Simply put, we’re not spending our Medicare dollars correctly. Our current status quo across all of health care focuses on reacting to issues as they occur and treating them, but when low-income, chronically ill people can afford their medications, the model can shift toward prevention. With fewer extensive treatments and surgeries, we’ll save money and have a healthier population.

During a period when partisan bickering is threatening our institutions, more affordable health care is an issue all Americans can agree upon. From senators to ordinary citizens, almost all of us have experienced or know someone who has experienced sticker shock at the price of a prescription. It’s overwhelming to see someone holding a prescription that can ease their pain or lessen their symptoms, only to never turn it in to a pharmacist, simply because the cost is too much to bear.

More hearings in Washington alone will not solve the problem. Just as pills shouldn’t need to be split in half just to make ends meet, half measures won’t sustain us. There is no reason not to pursue common-sense fixes right now.